On Saturday, August 7th, 2021, Julie Aspesletten was crowned queen of the world’s toughest triathlon: the Zalaris Norsman Xtreme Triathlon at the top of Mount Gousta in Norway. A full Ironman distance that runs point-to-point – or fjord to peak – from a ferry in the Hardangerfjord to a finish at the rocky peak of Gaustatoppen at 1,850m above sea level, the race is 225km with an elevation gain of +5235m.

I did my first triathlon (a sprint distance) in August 2019 on a borrowed TT bike. I was terrified of the 750m swim, but I ended the day saying “I wanna do it again”. My second race was Ironman 70.3 in Dubai in February 2020. I finished 2nd in my age group with a time of 4h 29min and qualified for the World Championships in New Zealand. But as we all know, pretty much everything got cancelled last year. We had a few competitions in Norway, including “Coastman” where I became the Norwegian Long-Distance Champion.

Planning the 2021 season was challenging, but I spent the beginning of the season building a solid base for what could potentially become a race season. In June 2021 a few slots for Norseman were made available due to travel restrictions related to the pandemic. I put my name in the lottery and got a slot for the 2021 edition of the race. That meant my dream of doing Norseman came a bit earlier than expected...

I had trained systematically for the 70.3 distance throughout the year, and the winter training and season so far had gone very well. But now I had 10 weeks to prepare myself as best I could for a very different and much longer race. This would also be my debut at the full Ironman distance. So, I turned down the intensity and increased the volume on key sessions. This would give my body a chance to adapt to the requirements of the race and for me to fine-tune my pacing strategy.

We spent a week in Geilo during our summer vacation to train on the course. I got to swim in the Hardangerfjord for the first time and ride across the Hardangervidda plateau in a sunny 22 degrees and a comfortable tailwind. The scenery was stunning! I got so excited to race there that I forgot how unstable and brutal the weather could be in the mountains. The weather on race day turned out to be some of the hardest I had ever faced.

After 10 weeks of specific training at home in Oslo and on the course, I started to feel as ready as I could with the limited time I had. And together with my support team we made a plan. We prepared for the worst but hoped for the best, and our goal was to get to the top of the mountain in the best and fastest way possible. I really just hoped that my mind and body could put together the race I had trained for and dreamt about.

My goal for the race was to complete my first full distance triathlon, avoid nutritional and mechanical issues and push to the maximum of my potential. My coach and support team believed that if I had an optimal day, I would be fighting for a podium finish.

Eidfjord at 3:00am on race day is something special. It's quiet, dark, and people with headlamps make it feel special. The place was calm, but my body was feeling chaotic inside. I was so nervous, but at the same time so ready to do what I had trained and prepared for during the last few months.

We made the jump into Hardangerfjord around 4:45am. I managed to hold on to my swim cap and goggles, but that, and the relatively warm water temperature (17 degrees) was about the only good thing about the swim.

It is very early to feel helpless after five minutes of a 12-hour race, but the waves were smashing us head-on the whole way into the fjord. I felt like I was standing still and since I didn't see many people around me, I lost most of my confidence. Swimming is definitely my weakest discipline, but after about 2,500m I found an ok rhythm and got to T1.

It was a long swim for everyone that day. I was the 4th woman out of the water with a time of 1h 23min, which was 13-15 min behind my goal time in “normal” conditions. I was told by my support team that I was 10 minutes behind the leader, but I was just happy to have finished the swim at the time. I was ready to get to work.

I enjoyed Måbudalen, it was a perfect temperature, no rain and I focused on not going too hard, and on eating and drinking. When we reached Dyranut (the start of Hardangervidda) the predicted headwind hit me smack in the face. The 13m/s wind was a real struggle.

I was told I was in second place, still 10 min behind the leader. That gave me lots of motivation, but I was focusing on my own pace and plan. My body worked well, my legs were good, I had enough clothes on, ingested my gels, and I was pretty comfortable on my bike. I was in the aerobars as much as possible and staying as aero as I could.

After a few hours I was actually looking forward to starting the hills at Geilo and getting a break from the wind. Sitting upright in the hills and seeing family and friends was a pure energy boost. They were there all the way to the top: smiles, words of motivation, music and cheering. All the cheering and support was just like caffeine gels kicking in time after time! Thank you so much, all of you!

We fought the wind all day and I closed the gap to the leader bit by bit. Being super aero on the flat windy section and downhill gave me a small lead into T2 and my nutrition plan worked perfectly. I consumed 12 gels, 2 bars, some candy and 3-4 liters of water with electrolytes and energy drink.

The run, the part I was most looking forward to, finally came. I came into T2 super happy that everything had worked out well so far without any technical issues. I had stuck to my plan by not smashing my legs on the hilly parts.

I ran the first 25km at my planned and tested pace. My support team continued doing an awesome job, and my body said “yes, ok” to gels and energy drink all the way. So far I had no stomach problems, nausea or blisters.

But again, you never know what can happen in this kind of race.

I was told that I was increasing my lead and the 15min I had coming into T2 was slowly growing to about 20-25min. But I was still terrified that I would get some kind of problem, sending me into the woods, not being able to take in nutrition, cramps and so on. This was my first full distance and I have so much respect for the distance.

I kept focusing on my own pace and nutrition, and started the famous Zombie Hill. The hill felt so much longer than ever before, and my head became like a zombie. I ran as much as I could, and walked in between while getting nutrition in. I picked up my backpack at Stavsro and started walking up to Mt. Gausta.

I didn't dare think of the victory until about 500m before the finish line. I heard my family cheering on me from the top, and then tears of joy got overwhelming! Out of the fog came the finish into view, and I was about to take the final steps.

Victory in Norsman 2021 became the final point to this absolutely incredible journey.

You can't do it alone, and I am beyond grateful for my rock-solid support team and so happy to share this day with them and my whole family! 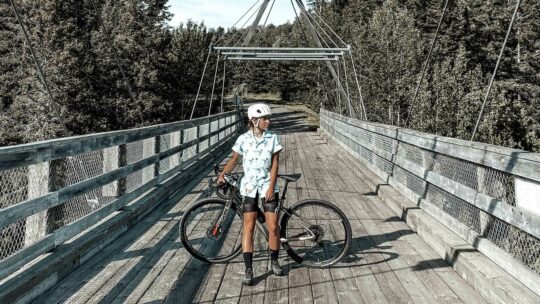 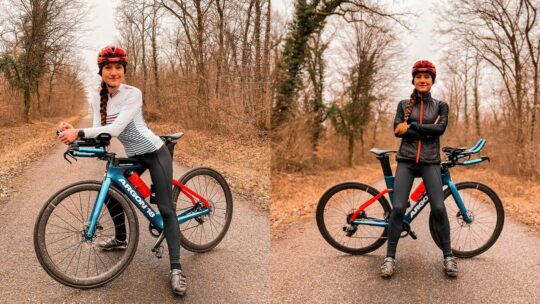